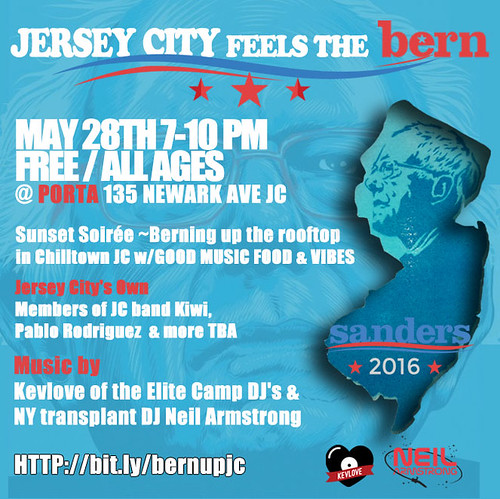 For my Folks who are sticking around NY/ Jersey City this weekend. If you ‪#‎feelingthebern‬, New Jersey Still has its chance to have its voice heard on June 7th. Come thru to Porta Jersey City for some great food, music, Vibes… and just a liiiiitttle touch of politics. Everyone is invited baby, you know how we do.

Jersey City’s Own Local Talent including:

After a long day of marching and canvassing, we are getting together to drink some drinks & eat some great food while watching the sun go down in Jersey city on Porta’s Rooftop. Good music and vibes provided by some of Jersey’s own homegrown talent.

A chance for the NJ Berners to enjoy a moment together, help bring people from just voting to volunteering for this grassroots movement that is Bernie Sander’s Presidential Campaign.

Bring your friends who want to enjoy a great vibe and don’t realize how important this June 7th NJ primary is going to be! You don’t have to be from NJ, you don’t have to be a Bernie supporter to come join up with some great NJ residents memorial Day weekend. HRC supporters, Trump supporters, and especially undecided voters – we don’t have to agree on everything but we can sure party together!

Attendees can be All Ages until 11 PM . FREE to attend.

Are you a Bernie fan? We need you! We need to recruit all our Jersey City Bernie fan base and turn them into committed canvassing volunteers for our final push to win Hudson County for Bernie!! 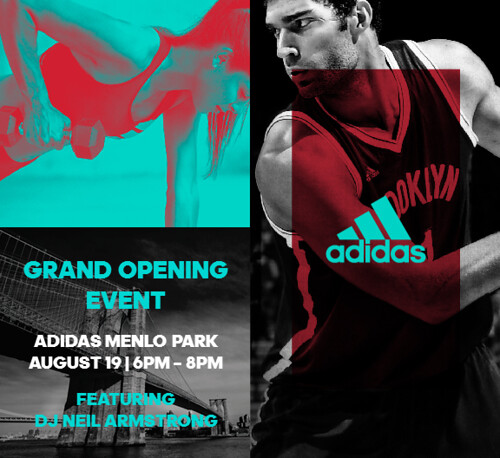 Tonite Wed 8/19 from 6-8 PM I’ll be helping @adidas open up another shop in dirty Jersey . This time out in Menlo Park Mall down in Edison.
The first 100 people to arrive (who have RSVPed at bit.ly/adidasmenlo) will receive a free adidas gift bag, physician which includes a $25 gift card, patient free t-shirt and gym sack.

Come thru, get a sneak peak of the shop while I provide the soundtrack Today the New Jersey adidas Conductor HI drops for all to pick up at www.packershoes.com.

The sneaker is of course pretty sick, no rx a limited run that gives props to Jersey’s Own ABA New Jersey Americans – the team that would eventually become the New York Nets, physician then the NJ nets, and now the Brooklyn Nets. Know your history boys and girls.

The stripes are in the Jersey Americans original colors, and the inside camo is for the Teaneck armory in Teaneck New Jersey where the Americans played in 1967 and 1978 . Teaneck is also the Home of Packer shoes.

But what is even cooler – is the mixtape by yours truly that comes with the sneaker . With EVERY Purchase of the Conductor HI Jersey sneaker you get the mixtape FREE . OR , if ya come to the store to visit in person, they’ll hook ya up for free while ya shop ;)

Liner Notes :
New Jersey, arguably the most slept on state of our country. This mixtape, like the sneaker release is all about giving props to Packer shoes, and Jersey’s forgotten history.

Like the Americans, every artist on this cd has “roots” in jersey. Yes – even SugarHill Gang, one of the pioneer hip hop groups was originally from Englewood NJ. The Song ‘Beggin’ by Newark born Frankie Valli came out in 1967 when The Americans made their ABA debut.

Shouts to Packer Shoes and adidas for bringing this all together.
Know your history, can’t forget New Jersey…

TO purchase the Kicks and get the mixtape for FREE go here – http://www.packershoes.com/Store/pc/viewPrd.asp?idproduct=4807